Yesterday I side-stepped the to-do list and went to the park. There, beneath an almost impossibly blue sky I soaked up the sun and the people around me. They gave me hope.

Behind the bench where I sat two young men with dreadlocks and tshirts that sported the Jamaican flag spoke softly, their voices flowing in the musical cadence and rhythm that makes my inner dj play a little reggae.

A group of older Asian men and women played croquet, shouting at each other and erupting into shared laughter when a shot went wide.

Next to me on the bench, two women with different European accents talked about their mothers- how they missed them, how they wished they had lived closer in their mothers' last days.

A small circle of teenagers did yoga on mats laid out on the grass.

A young woman with a stroller entered the park. She was wearing traditional Muslim clothing for women- a long-sleeved garment that skimmed the ground, a head scarf without a face veil. As she moved past the place where I sat, one of the men behind me called out to her, and moved quickly in her direction.

Everyone in the vicinity seemed to notice and stop what they were doing to watch. The man who'd called out ran across the grass toward the woman, barely pausing to scoop up a small jacket on the ground. He held it out in front of him.

“You dropped this,” he said. He stood more than a yard away from the woman. She turned toward him and paused looking startled and pale. They both seemed to hesitate, unsure of what to do next.

Then she stepped forward, took the jacket, nodded and smiled broadly.

And the man with the dreadlocks put the palms of his hands together in front of his heart and bowed to the woman whose smiling face was round and shining beneath her headscarf.

The noise of the croquet game resumed, the budding yogis changed positions, the women on the bench nearby went back to their conversation.

Another wonderful pic from Karen Davis at https://www.facebook.com/OpenDoorDreaming/?fref=photo​- this is just how the leaves looked against that blue sky yesterday. 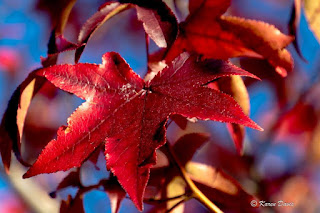