This is a little story about how prayers are sometimes answered in ways we don't expect.

I'm writing a new book. I start with stories. I think of it like gathering the raw materials- clay or stone- for a sculpture. This can evoke a sense of overwhelm as I sit with all I have gathered and struggle to find a structure for the book

Two weeks ago, I started to pray for help in finding this book's structure. A day later, I got a request to do an interview with Michael Gervais, a coach for the Seattle Seahawks  (yes, I had to look them up to find out they played football) who does a podcast called "Finding Mastery." I was leery. I know nothing about sports, and I tend not to use the word mastery because it awakens my inner perfectionist and can imply a promise of control where little is available. But I listened to his interviews with Brene Brown and others, and said yes.

To prepare, I started writing about what "mastery" might or might not be for me. An email from Gervais' office suggested I talk about the events and people who have influenced me most in my life. So I wrote some more.

At some point it occurred to me that this prep was rendering an outline for the book I was writing. And when the interview was postponed for a week, I got another seven days to refine my sense of the focus and flow for both the book and the interview.

Remembering my prayer, I laughted out loud. I had not thought of my prayer for assistance when the interview request was made, and yet here I was, finding a structure for the book.

In magic-making circles it is said that there is always "an infinity of solutions," so requests for assistance need to allow that which is larger to point to things we aren't even considering. This unfolding was a lovely reminder of just  how one thing can unexpectedly lead to another in the most delightful way. ~Oriah

I titled this stunning photo from Karen Davis at Open Door Dreaming, "Layers." Felt like a match with this little story about the layers of experience that can sometimes unexpectely lead us where we need to go. 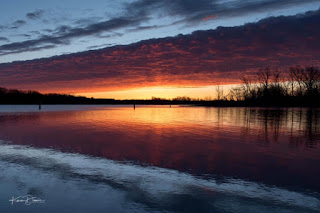 Living With Others' Choices

How about a little pre-holiday prep for those family gatherings where we sometimes get our buttons pushed?

Let's try a little experiment: think of someone who has a specific behaviour that you feel is damaging to themselves or others or yourself. Maybe it's a family member who seems to make self-sabotaging choices. (We are always so much wiser when examining others' lives than we are our own :-) ) Or, it could be a co-worker or neighbour who does something that has a negative impact on you. Now think of this specifically in the form of "S/he won't . . . . ." (fill in the blank.) Say it to yourself a few times.

I think back to my marriage and how, over a lot of time, I discovered that the wasband was lying. A lot. About things that mattered and things that didn't. I felt hurt, angry, and baffled, often asking him, "Why won't you tell me the truth?"

On the day of my liberation from suffering about this, something odd happened. A lie he'd been telling came out (and a pretty serious one at that.) But instead of thinking, "Oh here we go- he just won't tell the truth," for reasons beyond my comprehension, I felt spectacularly calm and thought, "He can't tell the truth."

In that one small word change I got that 1) his lying actually had nothing to do with me; and 2) it was not going to stop in the foreseeable future. I actually asked him about this and, to his credit, he replied, "I could say it would stop, and really mean it, but no, it probably won't."

Seeing what someone can or can't do makes it less personal, but that doesn't necessarily mean we will want to stick around. He could not tell the truth. And I did not want to live with someone who lied to me daily. So, I left.

The truth is that we cannot know what another can or cannot do at any given moment. When we tell ourselves that someone "won't" do something, we are assuming they have a "real" choice (one they can see, access, and act on under current inner and outer conditions.) And the truth is we don't know if they could or couldn't do something differently. But when we tell ourselves they "won't" it's hard not to take it personally.

So, whomever you thought of at the beginning of this, think of them now and try saying to yourself (about whatever it is you wish they would do differently,) "S/he can't. . . . . "It's not a "solution" to that which impacts us, but it might make us more compassionate and accepting, and from there we can decide what our own choices really are. ~Oriah
Posted by Oriah at 12:11 PM 2 comments: